This homebred, fabulous black stallion is a son of champion AH Kuda, out of Straight Egyptian mare Inaya bint Atticus (The Atticus). His dam's bloodlines are pure quality. She is a daughter of our Imperial Madheen mare MB Dhakeena. SG Indigo's grandsire is Pilot by Fawor and Indigo has inherited many of his grandsire's finest attributes.

SG Indigo has immense athletic ability in every lengthy stride and was an impressive youngster. He is true blue black in colour, with no white markings. Indigo's neck is swan-like and extreme. His movement extravagant and exciting to behold.

SG Indigo's first foals arrived in 2009 and are a true stamp of their sire. He is now owned by Aspire Arabians in the UK. 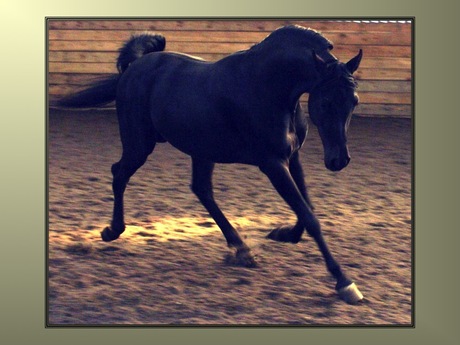