Dam of SG BORANYA,Georgian Arabians foundation mare LUZHANA,was 68 percent CRABBET, out of LUDORA and by Polish stallion RESOLUTE BAY. She had a succession of colt foals, until one day this much wanted filly was born. Sired by Spanish NATIONAL CHAMPION Champion BORNEO, Boranya was not only well put together but a powerful mover and gorgeous in type. The very first article written about her described her as "She stepped out of a dream," and for breeder Susan George she most certainly did.

Boranya has a beautiful full sister and both mares are a mirror of their dam. SG BLISS and her handsome chestnut son SG BELLISSIMO owned by Noelle Skingle of Diamond Farm. 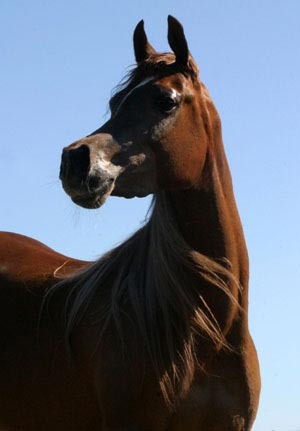