MB DHAKEENA is Straight Egyptian and a daughter of the World famous stallion IMPERIAL MADHEEN. She has a body hard to fault and a nature that is as gentle as a lamb.With her excellent limbs and correct conformation, she has not surprisingly produced some quality offspring, that all exude type and presence. In a showcases some years ago, we presented DHAKEENA to the music of "Lady in Red" with her impressive family following behind. An amazing sight to see and something we we will always treasure.

Inaya Bint Atticus, Dhakeena's first daughter, also produced a formidable family of beauty and two years ago, a super colt, sired by British National Champion SG Imagine, SG Iyenga Image. Sadly it was to be her last baby as we lost Inaya in 2013.

At the grand age of 21, in May 2015 Dhakeena delivered a gorgeous filly by SG Imagine. 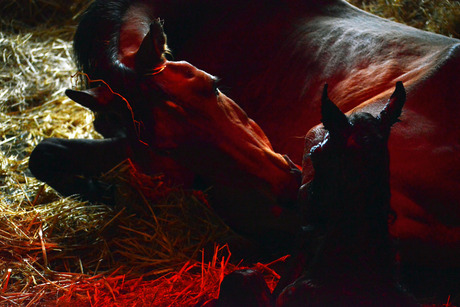