HAITI SHAKLANA shown as a yearling and crowned JUNIOR CHAMPION and OVERALL CHAMPTION at the Egyptian event in the United Kingdom has proved in later life to be one of the most prolific broodmares for Georgian Arabians. Producing Champion offspring in both halter and ridden disciplines. Her son SG JEDDAH by JULLYUS JJ, crowned BRITISH NATIONAL CHAMPION NOVICE ridden stallion in 2011.

In 2012 SG VIENNA IMAGE was born to Haiti, sired by SG IMAGE, son to WH JUSTICE and British National Champion. This black filly can only be described as of exceptional type and quality. She floats on the move with cadence and presence in every stride, with star presence and attitude just like her father. Last year Haiti amazingly produced another filly, a full sister to Vienna and as much as she is jet black, SG HON FLEUR IMAGE, is snow white. 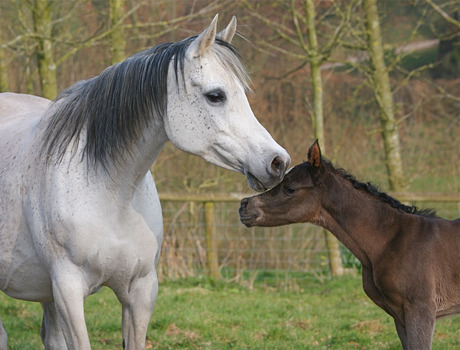